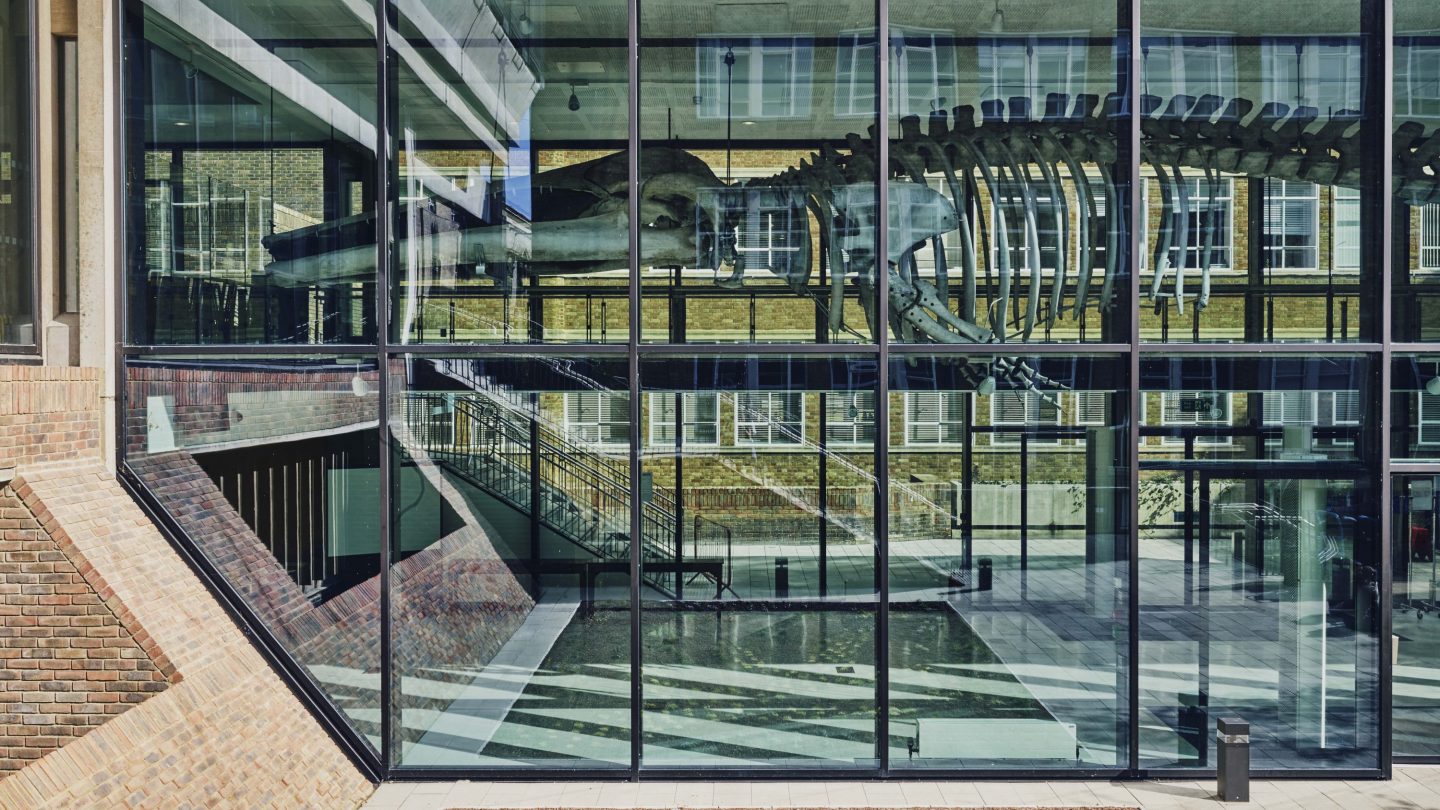 What do you do with a 150-year-old whale skeleton in need of a hip replacement? CAM went behind the scenes at the Museum of Zoology – due to reopen this year– to find out

On the evening of 13 November 1865, a coastguard noticed something strange in Norman’s Bay, Pevensey. A massive fish, 70-foot long, had washed up in front of the Star Inn.

Great excitement ensued. The nearby town of Hastings, East Sussex, and the local Customs Office claimed what turned out not to be a fish, but a fin whale, and auctioned it off. Ten local fisherman bought it for £38 and charged 6d to see it. Around 40,000 people flocked to look at it. Demand was so great that a temporary railway station was allegedly built on the beach. The Star Inn ran out of beer.

The fishermen cut the whale up and prepared the bones for exhibition under the guidance of William Henry Flower, conservator of the Museum of the Royal College of Surgeons. The following Easter, ‘The Skeleton of the Monster Whale’ was exhibited in the Central Cricket Ground at Hastings, before being sold to a new Museum of Zoology, which had just opened the year before, in Cambridge.

One and a half centuries later, the fin whale is still here and its latest incarnation is now on show. In the courtyard of the newly-named David Attenborough Building (formerly the Arup Building) sits a huge glass box. Inside hangs the enormous skeleton, curving gracefully from the ceiling. And even though the new Museum isn’t open yet, the whale is already working its magic. Stand outside the entrance for a few moments and you’ll see family after family, tired from a day’s sightseeing or shopping, pause, stare and wonder.

“It’s absolutely magnificent,” says Professor Paul Brakefield, Director of the Museum of Zoology. “It’s an iconic specimen with a fascinating history. It’s brought together a wonderful community, from the zoologists who hung it and the volunteers who cleaned it, to the historians who could tell us about its origins. The story of the whale is also the story of the Museum. The meaning invested in those bones has morphed over the years: anatomical specimen, Cambridge landmark, unique selling point, symbol of the Earth’s glorious biodiversity. ”

“Originally, this was a museum of comparative anatomy,” says Dr Adrian Friday, currently Research Fellow and former Curator of Vertebrates. “It never had the role of a natural history museum. Now, it has to accommodate that and also play a new role.”

Putting the whale on display for the first time took a while, understandably. The fin whale (Balaenoptera physalus) weighs around 80 tonnes and is second only to the blue whale in size. According to the Museum’s chronicles, the whale was finally articulated in 1896 by Ernest Lane, then Chief Technician.

Whoever tackled it did a fine job, with custom-made ironwork holding the bones together: legend has it that these struts were created in the University’s Engineering department. (That same ironwork holds the whale together today.) Photographs of the whale’s first mounting – it was supported from underneath by a series of columns – show it arcing over a cabinet of bony curiosities: rows of bristling antlers, two elephant skeletons side by side, a two-tusked narwhal.

Not everyone liked it. Dr Friday tells the story of how legendary physicist, Ernest Rutherford, felt that the Zoology Museum was a waste of space. “He once apparently said, ‘And I don’t know why they want that bloody great fish’. As one of the former directors of the Museum said to me: ‘Thereby illustrating exactly why we needed it.’”

Thirty years after Rutherford died, more space finally became available: in 1965, the New Museum of Zoology was demolished to make way for the Arup Building. The entire collection had to be moved. There were, of course, many other specimens: four million of them. But the ants proved far less of a problem than a 70-tonne whale.

The then Chief Assistant (the title formerly given to Collections Managers) RD Norman oversaw the removal, and the whale skeleton encountered perhaps its most unexpected resting place: a lock-up garage just off Mill Road. The skull ended up in a barn in Knapwell, a village just outside Cambridge. Again, it took a while to organise the new hanging: it wasn’t until the mid-1990s that it was decided that the whale should be rehung.

The old man and the whale

By now, Dr Friday was Curator of Vertebrates. He and his team retrieved the bones and washed them in biological washing powder, which contains powerful enzymes that eat up any biological material. Whale bones are tricky to keep clean: eventually, their sticky internal grease works its way through to the surface again, collecting dust and dirt along the way.

Dr Friday and his team then dipped them in an invisible PVA solution – the same substance that children use to stick collages in school – to weatherproof them. The whale was hung from metal cables attached to a steel beam in the ceiling, all made by local engineering firm, Mackays, in a small factory behind its tool shop on East Road. It finally opened to the public in 1997.

Spotlit and hanging directly outside the Museum amid the concrete of the Arup Building, the whale was intended to draw attention. It worked. “On the final day, the three of us – the then Chief Assistant, Ray Symonds, exhibition technician Mick Ashby and me – were completely exhausted,” remembers Dr Friday. “The sun was shining, it was a lovely day and I was going home.

“For the first time, the whale hanging above the Museum was visible from the road. And I watched an elderly gentleman with his shopping bags on the opposite side of Downing Street. He walked along and glanced sideways. He continued walking and then he suddenly stopped. He came back again and peered under the arch. I thought to myself: ‘Yes, we’ve done it’.”

The whale became a beloved Cambridge landmark. Students tended to respect it, says current Collections Manager, Matt Lowe, but the pigeons were another matter – and by 2013, the skeleton needed some TLC, as, indeed, did the Museum.

“Material Sciences moved out to West Cambridge and that left two-thirds of the building free,” explains Professor Brakefield. “Dr Mike Rands, Executive Director of the Cambridge Conservation Initiative (CCI), led the vision that the whole building could be devoted to biodiversity, with the Museum and CCI – a unique collaboration between the University and leading internationally-focused biodiversity conservation organisations – working in the same building, which we renamed the David Attenborough Building.

It was a wonderful opportunity to revitalise, refurbish and reorganise the Museum. We raised money from the University, the Heritage Lottery Fund, which donated £1.8m, other foundations and hundreds of private donors.”

Conservator Nigel Larkin, who has vast experience of dismantling large zoological artefacts, was brought in to oversee the whale’s third hanging. A team of volunteers took the whale apart, unthreading, labelling and photographing each bone. This time, the skull received five-star treatment: a special shed was built for it.

Then the clean-up operation began. The Museum recruited a 50-strong army of volunteers and trained them in the art of whalebone cleaning, this time mostly using toothbrushes dipped in Synperonic, an alcohol solution. The pigeons had left some specimens of their own. “When we took the skeleton down, we found a pigeon skeleton lodged up its nose, as well as many old nests,” remembers Lowe. “The pigeon poo was an inch thick in some of the vertebrae.” The whale’s baleen – which is made from compressed hair – went in the freezer to avoid pests.

After the scrubbing came the detailed repair work. The whale was never complete, says Lowe: the right-hand pelvic bone has always been missing. A 3D printing firm made a copy of the left-hand bone, which was then carefully painted by a specialist volunteer to exactly match its partner. Only then was the whale ready to rehang, a process that took around five weeks. Dr Friday hung the last vertebra, just as he did 20 years earlier.

Of course, the Museum is more than the whale: it’s a unique record of biodiversity on planet Earth for the past 200 years. Here is a trochus shell, collected from New Zealand in 1775 by Captain Cook. Here are some of the finches that inspired Darwin’s theory of natural selection and the feathers of the long-extinct moa. Here is the only dried Tasmanian tiger stomach left anywhere on earth, which Lowe discovered in a wooden box labelled ‘Collection of anatomical specimens, not zoologically important’, under a sink in a storeroom. In a digital age, the importance of actual things can’t be overestimated.

And here is the cleaned-up skeleton of the Asian elephant, which will now take its rightful place, once again, beside the skeleton of its African cousin, after being loaned to Stanley Kubrick during the making of 2001: A Space Odyssey. (Watch the opening credits and you will see its bones, but, of course, none of the ironwork which held them together. It is thought that at some point the ironwork and bones became separated, and there were no funds to replace it, until now.)

All these extraordinary specimens will take their place in the new Museum, cleaned up, rehung, re-displayed and given new context. It’s hoped that the fin whale will entice in a new generation of zoologists and biologists: come for the whale, stay for an extraordinary insight into the beauty, diversity and fragility of life on Earth, as Sir David Attenborough (Clare 1945) points out.

“Zoological museums are the bedrock on which the science of Zoology depends, and our conservation of the natural world depends on us understanding those objects. This marvellous museum at Cambridge University has functions both academic and scholarly, but also very importantly, it is a place where the public at large can come to see, study and wonder.”

“As time goes on you think ‘what importance is this collection going to have 200 years from now?’” says Lowe. “Will we still have the rhino? Will we still have tigers? I hope so, but if we don’t, then at least there is physical evidence that they existed. And we have to inspire people. Natural history unites everybody. It crosses all borders, all cultures.” Dr Friday agrees. “These days, historical collections don’t just enable people to see objects. They also have to make the point about what we stand to lose.”

Come and see the Fin Whale for yourself! The Whale Hall, at the entrance to the Museum of Zoology, is currently open on Fridays and Saturdays 12 noon – 4pm each week. The Museum will be having a soft opening from 27 March, and then will continue to complete works in the Upper Gallery until it opens fully at the end of June.