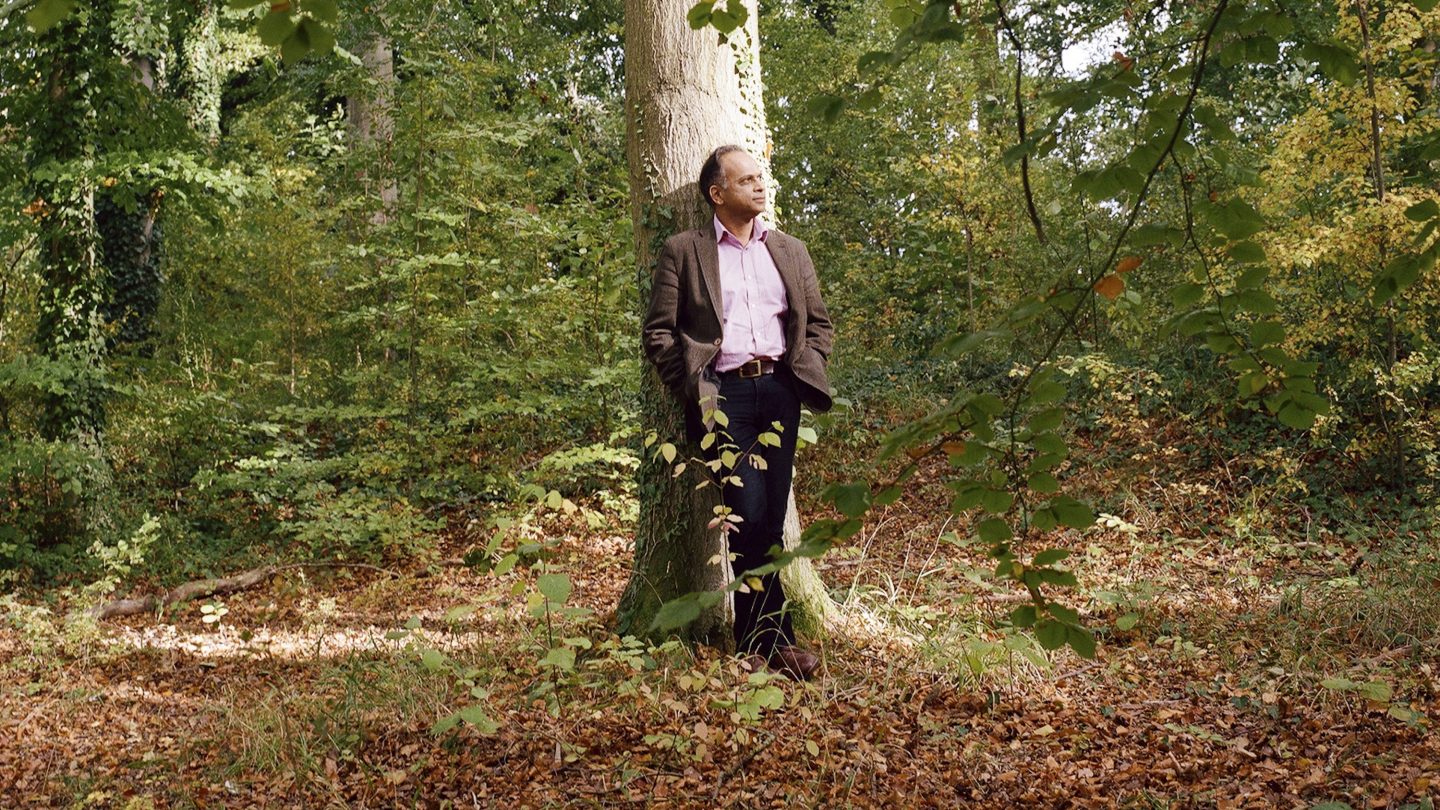 The economist-turned-geographer, Professor Bhaskar Vira, says that the natural world is good for us: economically, practically – and spiritually

At boarding school on the edge of the Himalayas in the 1980s, Professor Bhaskar Vira simply had to look out of his window to witness environmental destruction: his view was dominated by a limestone quarry, scarring the forested hills. But he also witnessed what happens when people with a deep connection to the landscape fight back.

“Environmentalism was coming into public life for the first time,” he remembers. “A group of activists lobbied the supreme court to ban the mining, and they succeeded. They restored the hillside and, if you go there now, there are almost no scars left from the mining. I’m sure things like that had a subconscious influence on me.”

Fast forward 35 years and Vira’s work reaches across disciplinary boundaries: economics, geography, public policy, conservation and international development. Originally a “straight down the line economist” who studied at the University of Delhi and at Cambridge, today Vira is “a geographer who has never studied geography”, Professor of Political Economy, and Director of the University of Cambridge Conservation Research Institute.

At the heart of his thinking is the idea that our relationship with the natural world goes beyond the merely functional. Living in and around nature adds to our wellbeing, regardless of whether the nature we can see provides us with drinking water, or wood, or food. Recognising that relationship is vital, he says, when thinking about ways to fight poverty while protecting the environment at the same time.

Vira’s Part II dissertation sparked his interest in environmental economics: it was 1990, the Rio Summit was being planned, and the environment was suddenly on the agenda. “The question in my mind was whether the discipline I was specialising in, economics, could add value to these global discussions,” he says. “That brought an activism into my intellectual life.”

The result was a move to help set up the Oxford Centre for the Environment and Ethics in Society at Mansfield College, which exposed him to colleagues from other disciplines including law, sociology and anthropology. He came back to Cambridge as a lecturer in environment and development in the Department of Geography. “And that completed my transition from training in economics to professional life as a geographer.” Vira’s passion for interdisciplinary working was cited by the Royal Geographical Society, which awarded him the Busk Medal this year. “I define myself now as someone who is interested in political economy,” he says, “a subject that has a long tradition in Cambridge, and has historically embraced an inclusive interdisciplinary approach and a wide range of social science influences.”

And that’s important, because early thinking about the environment and development generally ranged the two directly against each other. It’s certainly true, says Vira, that conventional development is responsible for much environmental degradation. “This then sets up a very difficult challenge. How can countries that are very rich in environmental resources hold on to those resources, while also pursuing strategies that improve growth and the wellbeing of their population? If you perceive them as being opposed to each other, as one at the expense of another, it becomes very difficult to try and imagine a scenario in which both are looked after.”

In the early 2000s, the concept of ‘ecosystems services’ came into play: the idea that nature provides vital services – such as drinking water – that allow humanity to flourish. In this model, instead of humanity’s and nature’s wellbeing being opposed, they’re actually compatible. By investing in nature, we’re investing in the wherewithal that allows humanity to lead better lives. Yet while drinking water is, of course, essential, there is another dimension to our relationship with nature, says Vira. It’s not just about the tangible.

“You might call it a spiritual or cultural dimension, but there are other dimensions to our engagement with nature that directly constitute elements of what we call ‘wellbeing’,” Vira points out. “In both philosophical literature and multiple different cultures, there is plenty of evidence that this resonates. It is not just that nature does things for us, but that it is fundamentally constitutive of our sense of self. We benefit from nature in ways that go beyond what it materially provides. So if that’s true, when we lose access to green spaces and impoverish the natural world, we are also impoverishing ourselves. Can we find ways to capture that in the ways we talk about and measure things like poverty?”

In the 1990s, he points out, there was a lot of focus around dam building. In the developing world, when you build a dam, you often submerge a village, and the villagers have to be moved. They were often given new homes, food to eat and fixed-income packages – but nonetheless being removed from a place in which they and their families may have lived for generations created a real sense of rupture. “And that is true anywhere in the world: look at the people who will be displaced by the third runway at Heathrow,” Vira says.

Which is one of the reasons he wants to help reshape the values by which we measure progress and wellbeing. Poverty measurement is now multidimensional: it takes in a whole range of factors including health and education. But the role nature plays in wellbeing is still not taken into account, and so consequently, nor are those aspects of poverty that emerge because of this deprivation.

“Nobody is asking questions about the loss of the natural in wellbeing surveys,” Vira says. “It’s not featured in people’s ways of thinking about poverty. The consciousness is not there. We feel that our measures of poverty are incomplete, they miss something that really matters to our sense of self. If we are trying to understand what makes people better or worse off, our connections to nature should be part of that story.” Reshaping these measures would make an impact at all levels: from the hyper-localised understanding of what makes a place better, to global measures and understanding of poverty, growth and GDP that better reflect the value that nature provides. The first of the UN’s 17 sustainable development goals is to end poverty in all its forms, everywhere. Within that goal, there are five targets, two of which are about the environment: to reduce vulnerability to climate-related events and to ensure that the poor and vulnerable have equal access to economic resources, including natural resources.

With that in mind, Vira is currently working on a project based in Brazil, one of the most data-rich countries in the world. The aim is to bring together data on poverty incidence and intensity, alongside data on health, education and living standards, and then map that on to available environmental data. He has also been working with colleagues in the UN on how this new approach might fit with the way the Rwandan and Malawi governments develop their poverty strategies. “They are very interested in thinking about how household-level questionnaires on poverty might better reflect some of our insights about the environment and those wellbeing indicators which are to do with nature.”

But he’s also excited about the possibility of small-scale interventions, such as a recent project in which he worked with local partners in six small towns in Nepal and India to raise awareness of how drinking water is extremely dependent on the immediate natural environment. It focused on the ecosystems that brought water to the towns, the pressures that threatened them, and the need for those who are planning water infrastructure to invest in the surrounding ecosystems. Afterwards, Vira and his team felt that the project should become part of the public narrative, so they worked with a photographer and mounted an exhibition, first at the Festival of Ideas in Cambridge, and then in Delhi.

“We had three big displays at the exit of one of Delhi’s main metro stations, so it was effectively like coming out of Westminster tube and seeing our photos and our narrative every day for three months during the dry season,” says Vira. “The next phase is to try and convert some of these images and stories into materials that people can use at a school level, so that kids begin to think about where water comes from.”

To work in the environmental field, he says, you have to be an optimist. Vira believes that humanity will recognise the value of what we are losing and find ways to respond to it.

“I think society has shown that once we are aware of these big issues we are able to make these shifts at short notice,” Vira says. “See how the BBC’s Blue Planet has changed how we think about plastic consumption. Suffrage for women, the abolition of slavery – big societal shifts have happened. Society has shown we can make big changes to the way we organise ourselves. I am optimistic.”

The University of Cambridge Conservation Research Institute (UCCRI) is an Interdisciplinary Research Centre, with a network of over 150 researchers from all six Schools of the University of Cambridge. The Institute supports multidisciplinary research on biodiversity conservation and the social context within which humans engage with nature. It works from a base in the David Attenborough Building, which is designed to enhance collaboration and the sharing of perspectives across organisational and disciplinary boundaries. Find out more about the UCCRI, one of the Cambridge Conservation Initiative’s (CCI) ten conservation partners based in Cambridge.