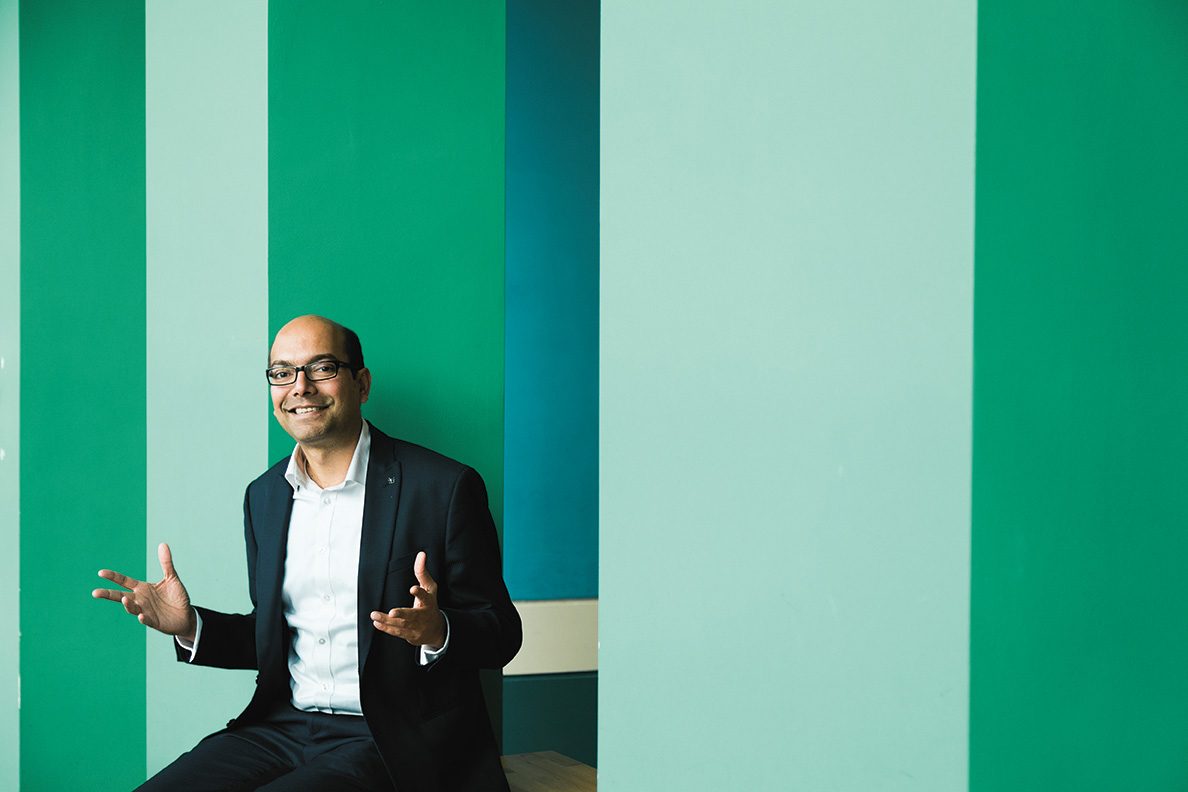 On 26 January, 2001, an earthquake of magnitude 7.9 hit Gujarat, India, killing over 25,000 people. Mansukhbhai Prajapati, a rural potter, escaped with his life but lost all his stock. All around him were people like him, coping with devastating loss and enormous practical problems. So he set out to help them in his way: he designed a fridge that would keep food fresh without electricity, using the only resource available to him – the clay with which he made pots.

One of Prajapati’s small, squat fridges – the Mitti Cool – sits in the corner of Professor Jaideep Prabhu’s high-ceilinged, light-filled office at the Cambridge Judge Business School (CJBS). No wires run out of the back: fill the top with water and it keeps the contents cool by the natural process of evaporation.

The fridge is a superb example of the concept the Jawaharlal Nehru Professor of Indian Business and Enterprise highlights in his book Jugaad Innovation: Think Frugal, Be Flexible, Generate Breakthrough Growth (co-authored with Navi Radjou and Simone Ahuja). Jugaad, a Hindi word, is the art of overcoming harsh constraints by improvising an effective solution, using limited resources. Anyone can do it, with anything, and it can happen anywhere. All it takes is ingenuity.

“The fridge is frugal, because it runs on water, which cools as it evaporates,” explains Professor Prabhu. “It’s flexible, because you don’t need electricity. And it’s inclusive, because it’s for people who would like to have a fridge but can’t afford one – and even if they could, they might not have access to electricity. It’s a good-enough solution that works. It addresses a large part of the problem, meets an unmet need, and uses resources that are already available.”

Professor Prabhu’s journey of discovery began, naturally, in India, where he grew up. That India was very different from the one that the world now knows. “Everything was centrally planned,” he remembers. “The state was all-powerful. We were more or less equal, but equally poor, so we instinctively understood the importance of being frugal. In those days, you either became a doctor or an engineer, and that was your ticket out of India. I studied to be an engineer.” He left in 1989, along with most of his graduating class, switching from Engineering to Business and studying for a PhD in Marketing at the University of Southern California.

Shortly after Professor Prabhu’s departure, India changed. The then finance minister Manmohan Singh (a Cambridge alumnus) scrapped hundreds of rules and regulations that governed how businesses could operate, with the aim of growing India’s economy. Younger people still left India, but now their ultimate aim was to go back. Indian businesses such as Tata went global. Western companies came to India not just to set up back office operations but also to do research and development.

In 2008, after posts at the University of California, Tilburg University in the Netherlands and Imperial College, Professor Prabhu became the first Jawaharlal Nehru Professor of Indian Business and Enterprise at CJBS. In 2009, he was appointed academic director of the Centre for India & Global Business, set up to study India’s role in the global economy from a business perspective. “This, in itself, was indicative of the new India,” Professor Prabhu says. “It would have been slightly whimsical to have a centre devoted to the global role of Indian business 20 years earlier.”

Up to this point, Professor Prabhu’s main interest had been innovation in western corporations. The received wisdom was that this was where innovation happened: with big budgets and massive research and development teams pushing the tech frontier. Now he had the opportunity to study innovation in India – and he soon realised that the Indian approach was vastly different from corporate innovation in the west.

“In India, it was all about being affordable,” he says. “Doing more with less. Taking advantage of the limited resources you had. The process was not terribly structured. Indian innovators might have a plan, but they would switch from one plan to another, partly because the environment was changing rapidly. And a lot of the solutions seemed designed to bring people who are outside the formal economy into the formal economy, so they were inclusive.”

His views about innovation, based on western corporations, were challenged. Travelling around India, talking to people from all sections of society, he realised that innovation can happen anywhere.

“And it wasn’t so much about technology; pushing the tech barrier for the sake of it. It was about identifying an unmet need and then figuring out: ‘Is there a technology already around that I can use to produce an affordable and accessible solution for this unmet need?’”

Many of the best examples of jugaad innovations come from the developing world. For instance, in their Indian R&D lab, General Electric developed a robust and portable ECG machine made from easily available, off-the-shelf components: telephone keypads and a printer originally designed for bus tickets. Practitioners on the ground are creating their own solutions: Dr Devi Shetty, a sort of “Henry Ford for heart surgery”, has applied the principles of scientific management – division of labour, economies of scale – to carry out highly affordable heart operations in resource-poor settings. Microfinance institutions make use of what is already there – people in villages (often women) who pool their resources and act as a joint liability group – to fill the gap left by banks that find it too expensive to reach communities beyond cities and towns.

Professor Prabhu points out that this concept isn’t unique to India. In the US, it’s DIY culture. The Brazilians call it gambiarra or jeitinho, while Africans know it as kanju. It’s not new, either: necessity has always been the mother of invention. But set against today’s backdrop of rapid technological innovation, emerging markets and resource depletion, jugaad suddenly becomes very relevant.

The Raspberry Pi, Professor Prabhu points out, is a superb example of a jugaad innovation. Developed by a team of Cambridge computer scientists, the £30 Pi is a highly affordable solution for budding engineers looking to gain hands-on experience by tinkering with computers and coding for them. The sharing economy typified by companies such as Airbnb is another example of frugal innovation in the west. “In the west, people are positively empowered to do more with less,” he says. “These pro-sumers – people who are more actively involved in the economic process – are driving things such as the sharing economy, where we can directly trade spare assets with each other on a digital platform.” Makerspaces are another example: places where “makers” can try out equipment, learn skills like coding, and swap ideas, experiences and expertise.

The possibilities are endless. In emerging markets, he points out, people have no choice but to innovate in this way. “In India and China, hundreds of millions of people aspire to the lifestyles of people in the west. Their governments and economies have to deliver, but they can’t deliver in a resource-heavy way. Their solutions cannot be expensive and they cannot be resource depleting, because that would destroy the planet.”

But in the west, many people are choosing to innovate frugally. Growth must happen to maintain the west’s economic system, but it can’t be done on the back of resource depletion, Professor Prabhu says. People know this. They want to make the world a better place, and leave it a better place, too.

“The economy has to grow in a frugal, resource-preserving way,” he says, “So there’s that pressure – the push factor, if you like. But there’s also a pull factor. People are now empowered. Increasingly, they don’t want to work for large companies. They want to make a difference themselves. And they have access to all these tools – smartphones, makerspaces, cheap computers, the internet, social media: the barriers to innovation have fallen across the board.

“I truly believe that we need this way of thinking in both the developing and the developed world, and I think we’re headed to a place where the two will meet in interesting, creative ways.” The future’s bright: the future’s frugal.

Catch Professor Jaideep Prabhu at the Hay Festival on the 26 May 2018 where he will be speaking on: Frugal Innovation – how the globe is learning to do more (and better) with less.