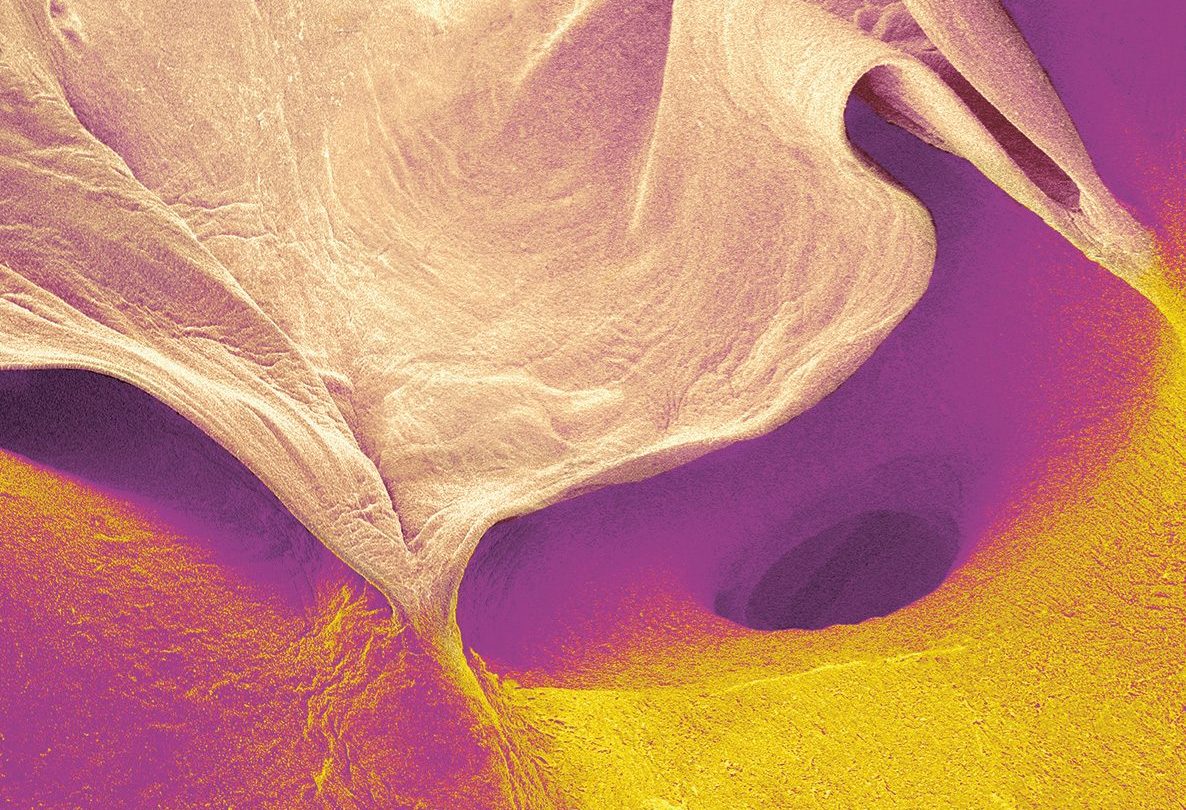 Heart and lung diseases are the leading causes of premature death worldwide. What can be done? Work at the new Heart and Lung Research Institute hopes to supply some answers

Sean Doyle’s heart problems began out of the blue. One moment he was on his way to Huddersfield parkrun; the next moment he collapsed. Doyle had a blocked artery and suffered his first heart attack.

By an extraordinary stroke of luck, his GP and a nurse were both running that May morning in 2013, and performed CPR until the paramedics arrived. Doyle – who had a second heart attack on the way to hospital – was put into an induced coma and had a stent fitted.

A week later he was back at home and, after cardiac rehab, pulling on his running shoes again. Although his marathon days are over, Doyle is back to parkruns and the occasional 10k. “My trainers tend to last about 600 miles,” he says. “I’m now on the fourth pair since my heart attack.”

Prompt action saved Doyle’s life, but many others are not so lucky. What will herald a step-change in tackling the global epidemic of heart and lung disease is the arrival of the Royal Papworth Hospital on the Cambridge Biomedical Campus. By combining the UK’s largest specialist cardiothoracic hospital with the University’s top-ranked medical research, and providing innovative educational facilities and a 10-bed clinical trials unit, the Heart and Lung Research Institute (HLRI) will attract the best clinicians, researchers and industry partners who together will deliver better ways to prevent and treat heart and lung disease.

Martin Bennett, British Heart Foundation Professor of Cardiovascular Sciences, works on heart attacks. Most coronary heart disease deaths are caused by a heart attack, and in the UK in the 1960s, more than 70 per cent were fatal. Today, more than seven out 10 people survive – a proportion Bennett aims to improve.

Plaques in coronary artery walls are build-ups of material covered by a fibrous cap. Over time, the arteries narrow and restrict blood supply causing angina and, if the plaques rupture, a heart attack. Not all plaques, however, are likely to burst. “Size matters, but structure is most important,” says Bennett. “Some are big but fibrous and very stable. Others are small with a thin cap, and these are very dangerous.”

To prevent heart attacks, cardiologists such as Bennett need a way of distinguishing the two, something current techniques cannot do. Angiograms produce only a silhouette, showing that arteries are narrowing. A newer technique – intravascular ultrasound – is better, but still only predicts 20 per cent.

“Having reached the limit of detection with imaging, we decided we needed to look at the other side of the equation, and that’s why the University is such a great place to work,” he explains. “We have engineers who test materials for buildings and bridges, and can work out the stresses and strains materials are under.”

By scanning plaques using ultrasound, Bennett and researchers in the departments of Radiology and Engineering can calculate which areas of the artery are under most stress. Trials so far show that the new technique can predict 50 to 75 per cent of events, and he hopes that in five years’ time it could change the way cardiologists manage patients. “It’s the sort of project that depends on cardiologists, engineers, mathematicians and computer scientists. Cambridge is great because we have all these experts.”

It’s a perfect example of how the new HLRI can change heart and lung research, leading to better outcomes for patients in future, says Nick Morrell, BHF Professor of Cardiopulmonary Medicine. “The HLRI will be a physical and intellectual hub for accelerating research and drug discovery, a hothouse for grand challenges in heart and lung disease,” he says. “The clinical resources of the Royal Papworth plus major buy-in from AstraZeneca and GSK, as well as smaller biotech firms, make this a phenomenal opportunity.”

Professor Morrell has spent much of his professional career hunting for a cure for pulmonary arterial hypertension (PAH). A chronic and debilitating disease that affects blood vessels in the lungs, PAH causes tiredness, breathlessness and eventually heart failure. Continuous intravenous drugs can alleviate symptoms and buy people a little extra time. Morrell spends part of his time at the Royal Papworth Hospital, a clinical centre of excellence for the disease, which treats and monitors around 700 patients with PAH. But most of his working life is devoted to understanding its genetics and biology.

PAH affects around 6,500 people in the UK and devastates lives. “It’s rare but horrible,” Morrell says. “It tends to come out of the blue in otherwise fit, healthy people in their 30s, 40s and 50s, predominantly women and often precipitated by childbirth, so diagnosis is associated with a lot of personal tragedy.”

The first gene connected with PAH was discovered almost two decades ago. Mutations in the gene, BMPR2, explain around 25% of PAH and cause cells lining blood vessels in the lung to malfunction. Deficiency in BMPR2 means the cells proliferate, become inflamed and die easily, and understanding the process is key to discovering new therapeutic targets.

“This endothelial dysfunction seems to trigger these profound changes in the lung arteries,” explains Morrell. “The simple hypothesis we’ve been working on for years is that if you can restore BMPR2 function, can we reverse the effect?” Morrell believes he can, and has set up a spin-out, Morphogen-IX, to develop and test new ways of treating PAH.

“We have a 50-patient trial planned to test whether the treatment lives up to its promise, and we’ll have the results in two to three years,” he says. “It works completely differently from the existing drugs, and the whole rationale behind it is based on human genetic studies. Because it’s such a complicated pathway, the human genetics has given us this razor-like focus.”

Across the Cambridge Biomedical Campus in the NHS Blood and Transplant Building is Professor Willem Ouwehand’s lab, which is pioneering the genome science that has enabled Morrell to discover other genes associated with PAH.

Using technology that slashes the cost of whole genome sequencing, invented in Cambridge by Professor Shankar Balasubramanian in the Department of Chemistry, Ouwehand is examining large cohorts of patients – and revolutionising the understanding and diagnosis of rare diseases.

“In four years, we’ve sequenced the entire genome of 13,000 people with rare diseases. Bringing together so many of these patients has never been done before, and significantly increases the chances of discovering the genes underlying these conditions,” he says. “Having this new knowledge we’ve been able to develop a simple, affordable DNA test that can be used in the NHS, and beyond, to diagnose many rare diseases, including PAH.”

Ouwehand dislikes the term ‘rare’ diseases, pointing out that “inherited rare diseases affect one in 20 children born every year, or three million people in the UK”. And they play an important role in medical research: “Discoveries based on these diseases often give a strong signal to researchers and the pharmaceutical industry that the proteins encoded by a particular gene are a good therapeutic target. Several drugs now used to treat cardiovascular diseases, such as statins, were initially developed to treat families with rare diseases.”

His group’s major focus is platelet biology. Platelets are the second most abundant cell in the blood and, despite lacking a nucleus, these tiny cells are “loaded with goodies” that repair the blood vessel wall and make blood clot in response to the rupture of plaques in cardiac artery walls. This clot formation may lead to occlusion of a coronary artery leading to a heart attack.

Because platelets are integrally linked to heart attack and stroke, Ouwehand’s lab is looking for genes involved in platelet production and function. “We’ve built the biggest collection of patients with platelets that don’t look normal and don’t work correctly. We have sequenced the whole genome of nearly 2,000 of these people with rare platelet diseases,” he says. “They come from across the globe – Austria, Belgium, Germany, France, the Netherlands and the US, as well as the UK – and because Cambridge is a trusted partner, we can have global reach and give global leadership.”

Secrets of the neutrophils

While Morrell and Ouwehand focus on the rare, Professor Edwin Chilvers, in the Department of Medicine, treats and studies some of the most common diseases in the world. “Heart and lung disease kills more people than any other group of diseases, but it’s one of the most underfunded parts of medicine,” he says.

Professor Chilvers treats lung disease where inflammation is the major driver, including asthma (the commonest disease of Europeans) and smokinginduced chronic obstructive pulmonary disease (COPD), pneumonia (the leading cause of hospitalisation and death) and even multiple forms of fibrotic lung.

His research focuses on COPD (which affects 1.2 million people in the UK) and the role of neutrophils, a type of white blood cell that is essential to a healthy immune system. Neutrophils work by finding and eating bacteria, and preventing infections from taking hold. However, this can also result in unintentional injury to healthy tissues and result in chronic inflammation. Once infection is under control, this limb of the immune system should switch off, but in COPD, neutrophils remain activated, dysfunctional and refuse to die.

“Healthy lungs have clear and open breathing tubes that taper beautifully down towards the end alveoli, but in COPD neutrophils damage the airways, causing them to become narrower and often blocked with mucus, making them very prone to infection,” Chilvers explains.

To discover what traps these cells into a cycle of perpetual activation, he has been studying the chemical messaging systems inside the cells in order to design a drug that might put these cells back on to the correct path. It sounds simple but, until recently, neutrophils have kept their secrets well hidden.

“It’s very difficult to isolate and study neutrophils, especially those that have already moved from the blood into tissue, so we’re largely working away from the action. The other challenge is these cells are very easily disturbed, so working with them tends to tickle them up,” Chilvers says. Five years ago, he developed a new way of isolating and labelling neutrophils. “It’s made a big difference, allowing us to follow these cells around the body for the first time.”

As a result of the new technique, Chilvers and the pharmaceutical companies he collaborates with have new drugs in clinical trials that they hope will transform the lives of those living with COPD. “If we can give drugs that strip out neutrophilic inflammation, that would give a good chance of stopping the damage and resolving the inflammation,” he says. “People with COPD are on an inexorable decline in lung function. If we could stop that decline, it would be a fantastic achievement.”

Find out more about the new HLRI, which will deliver ground-breaking research thanks to collaboration between the University and Royal Papworth Hospital.