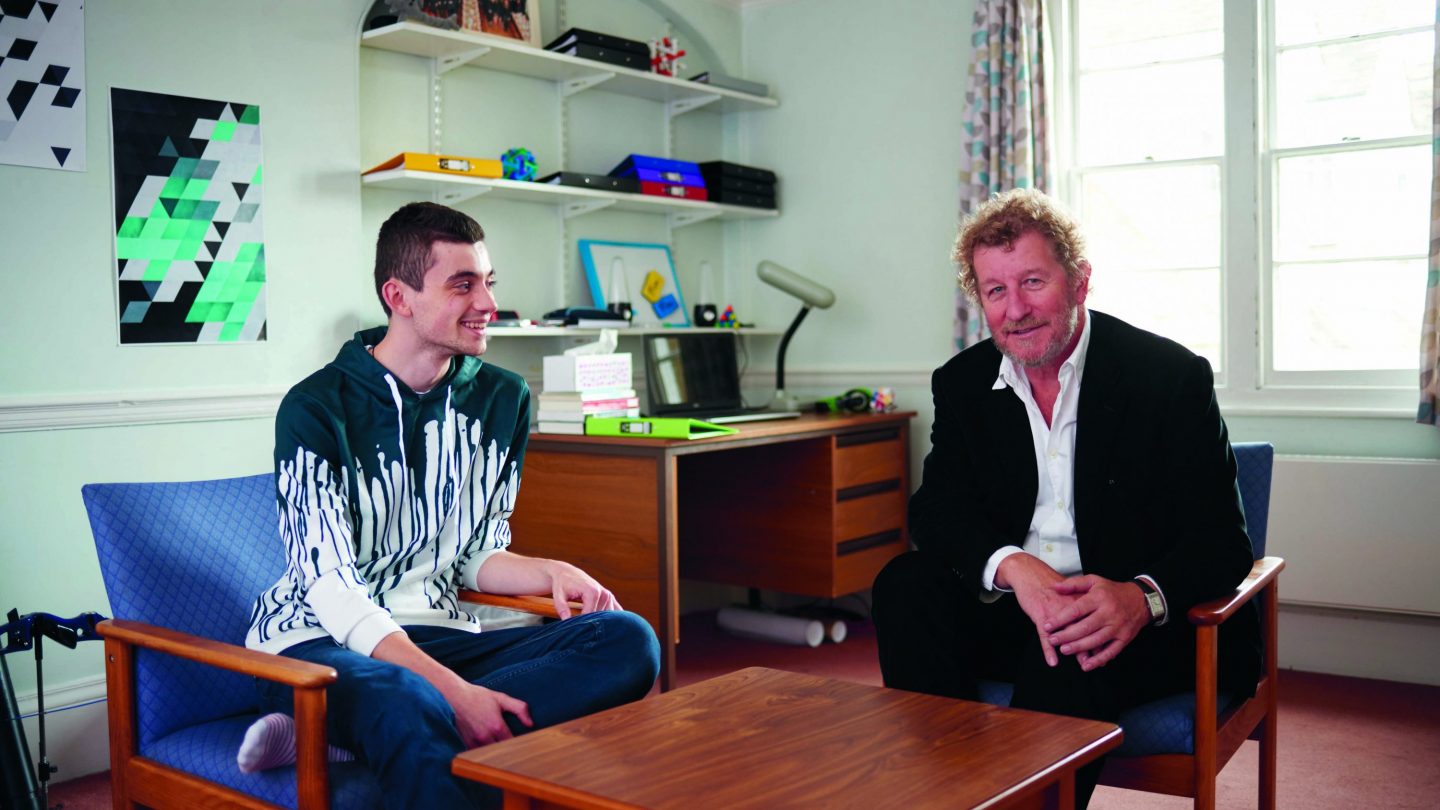 Back in 1973, the young Sebastian Faulks heard that prog-rock legends Procol Harum were coming to play at Cambridge. There was only one way to prepare: repair to P6 in the corner of Emmanuel’s New Court and get stoned. “And we did,” he remembers. “We got so wasted, in fact, that we missed the gig. Many years later I found out Procol’s van broke down and they never made it either!”

It’s a funny story. But it’s clear that P6 holds mixed memories for Faulks. “I was kind of semi-detached,” he says. “It’s a volatile time for young men, as your brain finally completes its circuitry. I think I was also in some kind of revolt. Though I don’t quite know what I was revolting against – my privileged education, perhaps.”

Today’s occupant, Fraser Waters, is having a very different kind of student experience. A quick glance round the peaceful, spacious room reveals a sports enthusiast (rowing numbers, squash rackets, a bow complete with a quiver full of arrows), and a keen mathematician (denoted by that rare sight these days: textbooks on a desk).

“I don’t spend much time here, to tell the truth,” he says. “I’d like it to be some kind of social hub but I always seem to be rushing around. Recently, I’ve been helping freshers move in. We have maybe three or four hours of lectures a day at most and then possibly a supervision, which would be an extra hour after that.”

Faulks’s days in P6 generally began at lunchtime. “I’d go and watch a film at the Arts Cinema in the afternoon, then come back here for tea and music. I had a great big music system which used to deafen the more studious people: Procol Harum, of course. Velvet Underground, Stevie Wonder.”

One thing the two do have in common, however, is utilising the small built-in wall cupboard for alcohol storage. “Whatever gave me the most bang for my buck,” remembers Faulks. “Martini, mostly. Red and white.” And they share a taste for eclectic decoration. Waters has plumped for six images of crystallised alcoholic drinks taken using photomicrography. “It’s part art, part science,” he says. Faulks remembers juxtaposing a poster of David Bowie, Lou Reed and Iggy Pop in a New York nightclub with a picture of Princess Anne and Mark Phillips. “I thought that was the height of, well, contrast.”

And although P6 comes complete with a kitchenette, neither of them seem particularly interested in food. “I’m not one for breakfasts,” says Waters. “I wake up, rush off to whatever I’m doing and then think: ‘Oh yes, I should probably eat’.” Faulks lived on rehydrated soup – “and pork pies. The pork pie in the College bar was excellent. I was even thinner than Fraser in those days.”

For Waters, Cambridge is “just a big adventure. I’d never really thought about where I was going in education. Then I got to the sixth form and they throw questions at you like: what do you want to do with your life? And you think: ah, I have no idea. Then someone suggested my grades might be good enough for Cambridge.”

“He’s got it all figured out,” says Faulks. “I do regret not making more of my time here. But Cambridge was quite dour. In an average day, the College bar would be three guys with hair down to their shoulders, smoking and drinking Double Diamond. A few years ago, I was in College for a dinner and about 100 young men and women were in there, nobody smoking, all laughing and having a fantastic time. And that’s a massive change.”

Sebastian Faulks (Emmanuel 1971) is a novelist, journalist and broadcaster. He was appointed CBE for services to literature in 2002 and his latest book is Where My Heart Used To Beat (Hutchinson).

Fraser Waters is a third-year mathematician who says that while he isn’t destined for a career in pure maths, he hopes to stay in education doing statistics research.