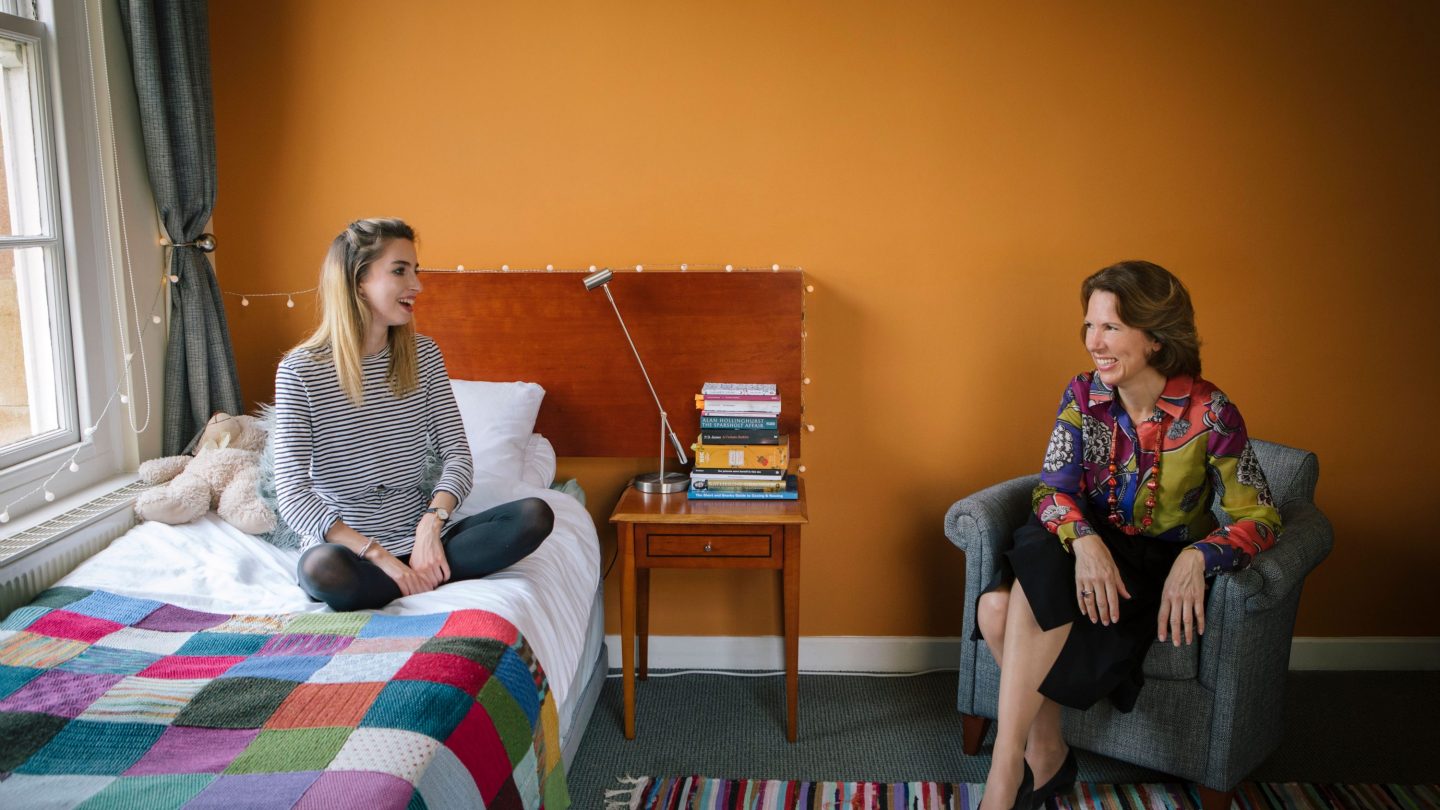 The former Europe director at the Foreign and Commonwealth office says getting out and about is key to making the most of Cambridge life.

With its two big sash windows looking out on to an expanse of green, and warm orange interior, Room 10 is rather lovely. But Caroline Wilson confesses that she spent very little time appreciating its charms.

“I do remember bringing posters,” she says. “Impressionists, I believe. I think I was trying to recreate the Musée d’Orsay in my room. It didn’t really succeed, but they blended nicely with the green outside!”

Perhaps that is why it is the black and pink Downing College Boat Club jacket, hanging over the desk chair, that really sparks Wilson’s memories. “I wasn’t particularly talented,” she claims, “though I did enjoy rowing.” And she agrees with the room’s current incumbent, first-year Ruth Parker, that Downing has – indisputably – the best rowing colours. Parker is a cox, and her corkboard is festooned with her rowing numbers. “It’s been really good for my confidence,” she says. “I get to stand there and yell at people!”

In fact, for Wilson, the real memories aren’t so much of the room but of the experience. She remembers listening to talks given by politicians such as Geoffrey Howe at the time of the Soviet Union’s collapse, and a trip to Brussels (as this was pre-Eurostar, she took the ferry). “Rather poignantly, given my current job,” she says, “I think I was also a member of a European society.”

Parker agrees that experience is key. “I used to visit Cambridge when I was younger and I remember looking at all the events posted up on the railings and thinking: there can’t possibly be this amount of stuff going on. But there is. I could be doing something every night, if I wanted to.” Seeing the late Professor Stephen Hawking speak has been her highlight so far, she says. “I know very little about the science, but I sat there going: this is amazing and I have no idea what it is about.”

For Wilson, the room also brings back clear memories of John Hopkins. “I will never forget him sitting with his pipe in supervisions, having a few puffs, tapping it on his shoe, and looking over the rim of his glasses. And the brilliant fellow students I was with. Those were the first really tough conversations I remember having. The supervisions only lasted an hour, but you grew a huge amount.”

Reflecting on her pre-internet college years, Wilson hopes that today’s students still experience the rich interpersonal relationships she remembers. She’s happy to hear from Parker that students still thrive on the debate, thirst for knowledge and, sometimes, sheer silliness that being thrown together in College entails. “If you spend all day writing an essay on your laptop, the last thing you want to do afterwards is something on screen,” Parker assures her. “Though we did have a day just before Christmas when the end of term rather got to four of us. Three of us are on this floor, one downstairs, but we sat in bed and FaceTimed because it was easier than meeting in someone’s room…”

Caroline Wilson (Downing, Law 1989), is Europe Director at the Foreign and Commonwealth Office. She speaks German, Italian and Russian and has held posts all over the world, including Russia and China.

Ruth Parker (Education with English and Drama, first year) is a self-confessed Harry Potter fanatic. “It was the first grown-up book I’d read. I got it into my personal statement and I am determined to get it into my dissertation.”