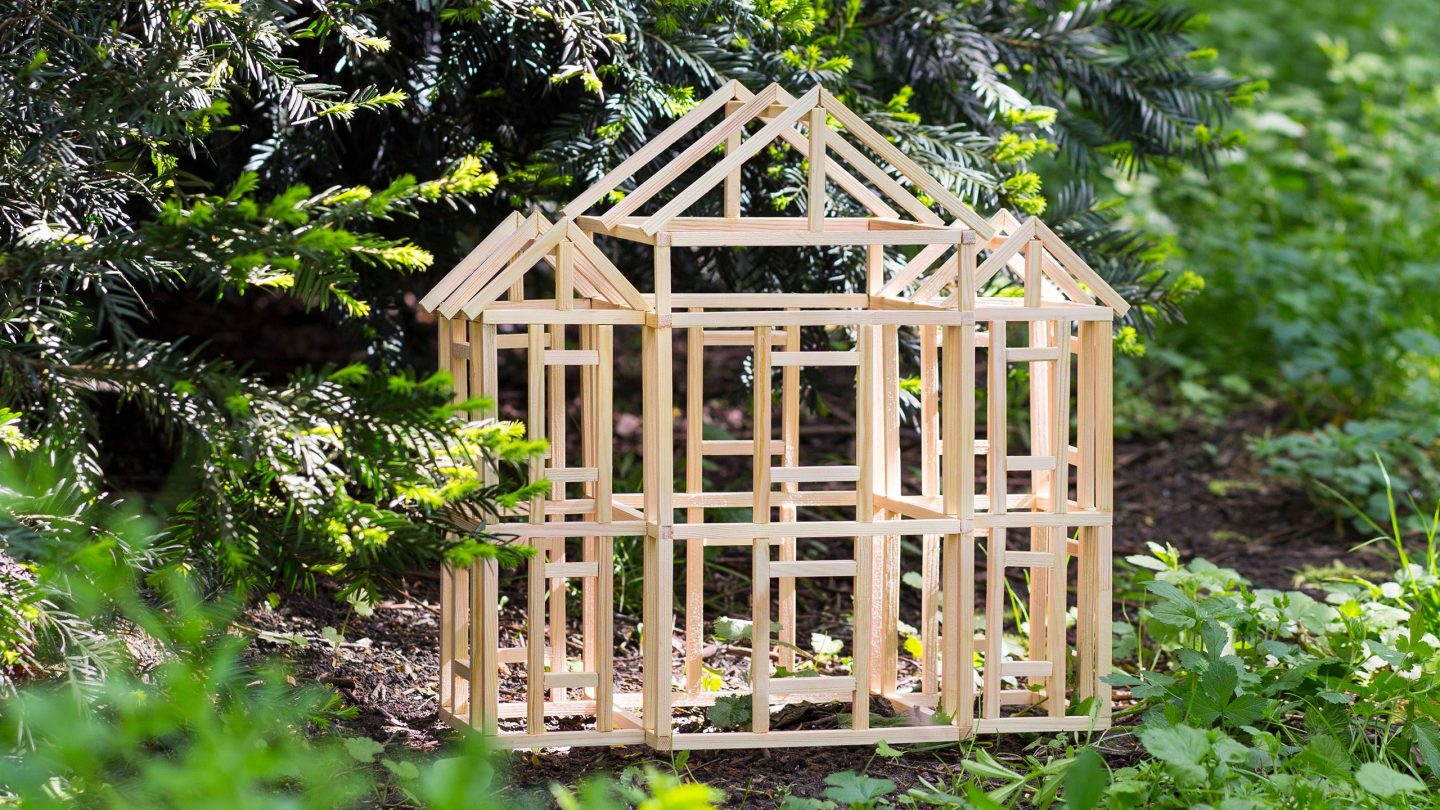 Forget IKEA flatpack furniture. When you’re the Ottoman Emperor, the height of chic is a flatpack Scandi garden house

This is a story about 19th-century globalisation: of flat-pack homes sold by catalogue, of the introduction of new ideas about domesticity and home-making, and of how the suburbs of Istanbul came to be dotted with Swiss-chalet-style timber buildings. And it all started with a climb up a steep hill to the Yıldız Palace Park in the summer of 2009.

I had not visited Yıldız – the Palace of the Northern Wind – before. I knew, of course, that it had been the seat of Ottoman government and the residence of Sultan Abdülhamid II from 1876 to 1909. I knew, too, that the property was a vast complex of pavilions and gardens, designed in different styles and located within a woodland overlooking the Bosphorus. But what I wasn’t expecting was the quirky beauty of the decaying timber garden pavilions studding the landscape. How had they come to be built here, on the hilltop? What were they for? And why did they look like Swiss chalets? I had to find out.

Like many Ottomanists before me, I made my way to the Başbakanlık Osmanlı Arşivi – the Ottoman Archives of the Prime Minister’s Office – now kept at a mammoth repository in Istanbul’s Kağıthane neighbourhood. The archives are vast, covering every aspect of Ottoman life in great detail, including a huge amount of information about the architecture and construction of 19th-century imperial palaces and gardens. However, bafflingly, I could find nothing about the garden pavilions. It was as if they didn’t exist.

My next port of call was the Rare Books Collection – which includes Yıldız’s library of books and manuscripts – held at Istanbul University. The collection is not fully digitised and I didn’t know exactly what I was looking for. What I eventually found was a collection of mail-order catalogues, from manufacturers as far afield as Sweden, Norway and Odessa, selling prefabricated timber chalets. The chalets of Yıldız.

Arriving in iron-reinforced crates from northern Europe, and then often customised by local craftsmen, these chalets – or Şale – would go on to become so popular that, by the turn of the century, publishers would be producing Mrs Beeton-style guides to the commissioning, design and building of timber prefab buildings for Istanbul’s middle class.

In fact, Sultan Abdülhamid II was at the forefront of what was, in fact, a global fad, sparked by the showing of a huge number of prefabricated timber buildings – most often manufactured in Norway – at the 1867 Universal Exhibition in Paris.

Spurred by a Romantic desire to express truth, transparency and virtue in one’s dwellings, the chalet craze was rooted in a pan-European idealisation of rural life, stoic peasants and philosophical theories that foregrounded hilltop and mountain settings. An early member of Abdülhamid’s translation office described one of the first chalets as ‘rustic’ (rustaî) and likened it to a gossamer birdcage among lofty trees and delightful meadows. Indeed, when the archivist of the Yıldız library lists the names of the catalogues, rather than making direct translation, he picks out the terms he knows will most appeal to his patron: ‘rustic’, ‘country cottage’, ‘orangerie’ and, of course, ‘chalet’.

They were not universally popular. To some visitors of the palace, Abdülhamid’s architectural choices appeared frivolous, insubstantial or even downright ugly (the Italian journalist Giuseppe Antonio Borgese, would later describe the chalets as “shacks”). But for the Sultan, these temporary garden buildings also had a personal resonance. A skilled carpenter – some of his intricate furniture, adorned with tiers of crenellations, niches, pilasters, reliefs and columns, can still be seen today at Yıldız – Abdülhamid would surely have recognised the chalets as buildings that he himself could easily construct and decorate.

And perhaps he had another purpose in mind as he commissioned chalets for Yıldız. Having built private chalets for his personal use, Abdülhamid now began to build bijou, one-room pavilions to house intimate diplomatic encounters. The best-known example of this is his erection of a chalet in İzmit to receive the German Emperor Wilhelm II and Empress Augusta-Victoria in 1898 – but a small pavilion was also custom-built at Yıldız to receive the Qajar ruler Muzaffar al-Din Shah on the last leg of his European tour in 1900.

Before his arrival, the Shah had requested that his Istanbul visit be modelled on the highly publicised itinerary, and pomp and circumstance, of the German Emperor’s most recent stay. However, for Abdülhamid, who had carefully rekindled his role as the caliph of the Sunni Muslims, hosting the Shia Shah was tricky. How was his initial encounter with a Muslim ruler of an opposing denomination to be enacted?

The answer was to create neutral ground. Stressing his caliphal role, rather than going in person, Abdülhamid sent his princes and viziers to greet Muzaffar al-Din on the Ortaköy dock. The Sultan himself then greeted the Shah in a boxy, single-room structure with art nouveau trimmings (called the Persian Pavilion – Acem Köşkü) that would serve as a makeshift, neutral stage for their complicated alliance. Recording the visit in his travelogue, the Shah remarked on the building’s placement at the ‘threshold’ (sar-dar) of a garden – and, tellingly, the photograph albums commissioned by the Ottoman court gave it the impartial designation, ‘the meeting spot’ (mülākāt mahalli).

But while chalet style was beginning to dominate the gardens of Yıldız, the written record from the period on the subject remains remarkably sparse. Although the owners of these secondary structures – bureaucrats or palace officials – were first and foremost writers who spent their lives with ink and paper, they do not reveal much about their interactions with these novel, experimental buildings crafted for private use, let alone the intense planning that went into their stylistic choices. When they wrote – and they wrote a lot – they were focused on matters of state.

In fact, the best narrative sources we have come from memoirs, such as those of Ayşe Sultan, Abdülhamid’s daughter, who remembers the chalets’ arrival, or those of Yorgo Zarifis, grandson of Abdülhamid’s banker, who recalls hiking between chalets as a particularly popular pastime for the women and children of the household.

But despite the dearth of contemporaneous discussion, there can be no doubt that the chalet craze was catching. Abdülhamid’s princes lined up a multitude of small, irregularly shaped, timber-framed chalets for their private use, along the narrow, forested garden next to their official apartments. Each of these chalets was unique, and reflected the interior arrangements and decorative choices of their respective owners. Their walls were covered in murals depicting snowy landscapes, waterfalls, lakes and mountain cottages. Separated from one another by a thicket of trees and landscaped cascades, the cosy kiosks gave the young princes individualised, intimate spaces ‘in nature’. Unlike their interconnected palace apartments, the chalets enabled an autonomous family life away from, and yet within, the court.

Indeed, so popular did the Swiss-style chalet prove, that Princess Djavidan, wife of Khedive Abbas II of Egypt, and a Hungarian, is the only person who is known to have thought them incongruous, declaring that the overall experience of a shaded grove with an Alpine structure on an Istanbul hilltop as one of make-believe. Time would prove her out of step with fashion. In a few short decades, the style Djavidan found out of place would become so completely acclimatised to the Bosphorus hills and shorelines that today it defines what is considered to be unassailably representative of Istanbul’s 19th-century domestic vernacular.

As chalet fever took hold, so local producers began to follow the trend, making prefabricated buildings available to an ever-wider circle of society. Propelled by an increase in the number of local newspapers and journals, the late-19th century saw growing numbers of men – and to some extent – women-of-letters documenting what it was like to live during the upheavals of empire at this time. The intimate interiors of the writers’ workspaces gained so much public attention that photographs of their study rooms occupied the front pages of the Ottoman journal Servet-i Fünun in 1898. The incredibly detailed shots revealed the decorative tastes of their owners: grand and ornate Empire-style desks and carefully arranged busts and portraits, overflowing bookshelves, upturned volumes, animal skins, carpets on walls, and even photographs of loved ones pasted on to brocaded curtains.

And where the bureaucratic classes led, the rest would follow. But the burgeoning Ottoman middle classes were not mere copyists of foreign exemplar; they put great effort into making their homes appear visually distinct. An example of this domestic consumption frenzy can be seen in Halid Ziya’s 1901 novel Fractured Lives (Kırık Hayatlar), in which an Istanbul doctor becomes obsessed with building a chalet. To create the perfect home for his devoted wife and daughter, and also to impress the passersby travelling to and from Kağıthane – then the most popular outdoor promenade for the Istanbulites – the doctor consults with architects, looks through architectural catalogues, and goes to study built examples in the fashionable neighbourhoods of Moda, Tarabya and Büyükada. Once all decisions are made, the doctor’s house rises as if it were “carved out of paper like light and elegant embroidery”.

The chalet may have begun as a popular plaything among the members of the court and the bureaucratic class, but it opened up a vibrant world of home-building – a “boundlessness of design in a country free of European architectural tradition and conventions”, as architectural historian Doğan Kuban observes. While Abdülhamid’s vision for Yıldız may have been the trigger, it was the growing agency and creativity of a consumer class that would go on to permanently inform Istanbul’s domestic architecture. And it all started with a prefab, Swiss-style chalet.

Dr Türker is an Affiliated Lecturer in the Department of History of Art. The proposed Islamic Art initiative at Cambridge will generate understanding of the richness and agency of Islamic culture, leading new ways of thinking and talking about Islam.

The models in the photographs were created by the artists and modelmakers Joshua Dean and Francesca Rausa.