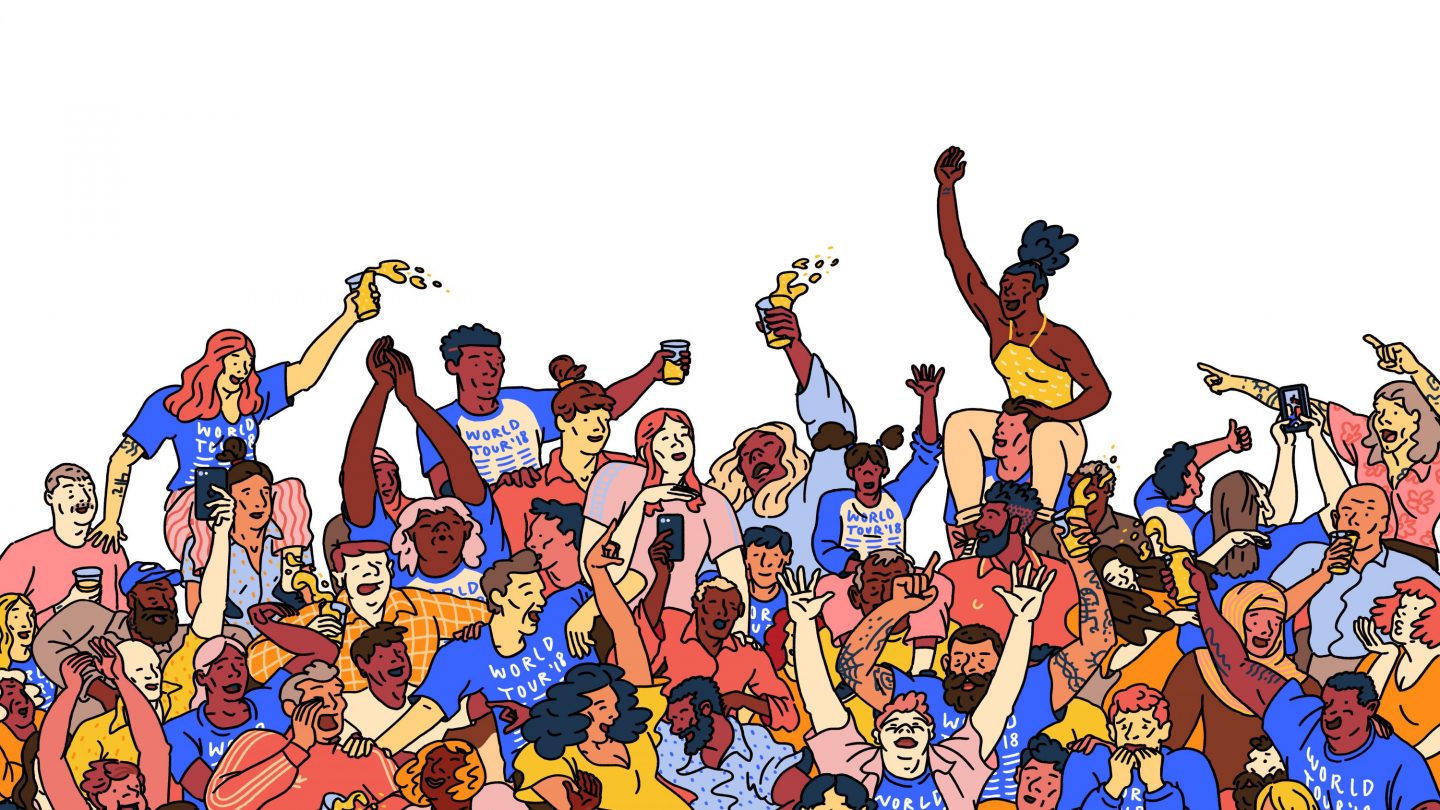 Whether wielded by rock stars or politicians, charisma is the ultimate soft power. CAM explores the dark side of this most alluring – and potent – of qualities.

“I don’t want to be rude but, really, you have the charisma of a damp rag and the appearance of a low-grade bank clerk. And the question I want to ask is: who are you? I’d never heard of you, nobody in Europe had ever heard of you.”

History does not record whether the brand-new president of the European Council, Herman Van Rompuy, went home and wept into his pillow after this zinger from British MEP, and leader of the UK Independence Party, Nigel Farage. It was February 2010 and with an escalating sovereign debt crisis to deal with, Van Rompuy presumably had little time to dwell on the rudeness from the floor. Farage was fined €3,000 and that was the end of it. Or was it?

Farage, however unwittingly, had put his finger on something important. Europe, and indeed the world, was entering an ‘age of anxiety’. And anxious times call for charismatic leadership. Damp rags might be good at cleaning up the mess, but they aren’t hot on hope or transformation.

Six years later, Farage was back. Alongside other unorthodox but expert popular communicators like Boris Johnson, then Mayor of London, Farage had helped to persuade almost 52 per cent of Brexit voters that permanently leaving the European Union was a good idea.

With Brexit in the bag, Farage was triumphant, while Jean-Claude Juncker, president of the European Commission, was incredulous. “You lied,” he told Farage. “You didn’t tell the truth. You fabricated reality. I regret that this is the last time we will debate with each other – because you won’t be coming back.” He was right. By August, Farage was in Jackson, Mississippi, on the campaign trail with a fellow charismatic political outlier – President Trump.

Exactly 75 years before Trump and Farage, another American president, Franklin D Roosevelt, burst into a bathroom at the White House shouting “United Nations!” His surprised guest, a certain Winston Churchill, clutched his towel a little closer and agreed that the idea sounded promising. Days after Pearl Harbour, the famously charismatic FDR was planning for peace before America had even entered the war.

Charisma, for good or ill, gets things done. But how does it work? And why? And when? Dr Sander van der Linden is Assistant Professor in Social Psychology and Director of the Cambridge Social Decision-Making Laboratory. He agrees that charisma is elusive but notes there are certain factors that charismatic people, from Gandhi to Oprah, all share: “Attractiveness; temperament; voice; eye contact; they use verbal and non-verbal communication very well; and of course they have a vision and communicate it powerfully – think of Martin Luther King’s ‘I Have a Dream’ speech.”

So far, so inspiring, but Dr Van der Linden confirms that, given an opportunity for real power, personal magnetism has a flip side. “Charismatic leaders become much more prominent in times of social crisis and social change because they present simple solutions to very complex problems,” he says. “We naturally drift towards resolving a state of anxiety because it is uncomfortable, so heightened receptiveness to a charismatic person is not unusual, and we become open to ideas that we might not otherwise be open to. In addition, being anxious eats up brain space, so we are less likely to think carefully and rationalise arguments.”

A close encounter with weapons-grade charisma is notoriously difficult to describe or process afterwards. It seems you really did have to be there. But, if you are determined not to drink the Kool-Aid, how do you resist it?

“Basically, the whole process needs to be interrupted,” Dr Van der Linden says. “The brain needs to be specifically prompted to become more analytical. For example, before going into a business meeting with a very charismatic, powerful boss, you could make pre-commitments with others who will be at the meeting to challenge them. If one person speaks up, others will follow. But there has to be that first disruption to the narrative.”

The ‘narrative’ of charisma as we know it today was set out a century ago by German sociologist Max Weber. Sitting in Heidelberg on the eve of the first world war, and feeling let down by the Kaiser whom he called “a dilettante”, Weber was wondering about power – what it should look like and who should wield it. We still need the rational structures of political life, like laws and bureaucracy, Weber reasoned, and there may be a place for the traditional hereditary power of monarchs. But there was a gap, an opportunity, for a different kind of leader; someone, he thought, “set apart from ordinary men and treated as endowed with supernatural, superhuman or at least specifically exceptional powers or qualities”.

Duncan Kelly, Professor of Political Thought and Intellectual History in the Department of Politics and International Studies, explains: “For Weber, charismatic authority is about control and he doesn’t believe you can be successful in politics without it. Is this power ethical? Weber isn’t sure. Charismatic leaders tend not to come through the usual channels, almost as if it’s a politics of the extraordinary rather than normal procedure. Where Weber is interesting is that he recognises that you need both types in politics, but also that both are problematic.”

Weber died in Munich in June 1920 and couldn’t yet see the kind of leader he was thinking about, although four months earlier, in the same city, Adolf Hitler had announced the programme of the Nazi party at its first public meeting. Charismatic authority was up and running, right past Weber’s window.

Twenty-five years later it was all over. Professor Kelly believes that’s why reading and learning from Weber today is still vital. “He offers a road map for possible success in politics where charisma plays a leading role, but it comes with a plausible structural explanation as to why it is that almost all political careers, charismatic or otherwise, nevertheless end in failure,” he says.

So what would Weber make of his Germany today, with the enduring, and determinedly uncharismatic, leadership of Angela Merkel? Professor Kelly smiles. “I think she represents what we could call ‘charismatic efficiency’,” he says. “She meets Weber’s requirements of the sober, responsible and independent-minded politician who can manage and deliver hard choices. But I think her charisma came through most strongly with her instinctive response to the migration crisis. There she reasoned with her heart, as an East German who moved to the West, and with the weight of the whole of modern German history to deal with. Of course, it has now cost her politically, but there we really see her trying to balance Weber’s two poles: the ethics of conviction and the ethics of responsibility.”

American novelist Henry James was Weber’s contemporary, but Weber’s work was not translated into English until 1930. So, as Emeritus Professor of English Literature Adrian Poole explains: “James could not have known or used the term ‘charisma’, but he was very interested in what he called ‘charm’ and how it worked in public and private life. He recognised the kind of super- or hyper-charm that the emergent modern world would require. The Golden Bowl, in particular, is a brilliant analysis of what it is to charm and be charmed, and to lead a charmed life.”

Like Weber, James is ambivalent about the power of charisma and is careful to show his readers all sides of the story. As Poole notes, “Gilbert Osmond in The Portrait of a Lady is charismatic for Isabel but not for everyone. He ‘captures’ her, whereas Lord Warburton simply ‘charms’ her. She marries Osmond willingly, but eventually she recognises this has been a calamitous mistake. Reading Henry James is good for you because the power of a charismatic individual never goes unchallenged.”

Meanwhile, in the ‘real’ world of 1901, James was watching a young Teddy Roosevelt, a man he felt to be “a dangerous and ominous Jingo”, become the first ‘modern’ American president – one who really understood the power of charisma and how to harness it.

Professor Poole, who delivered the University’s annual Graham Storey Lecture on ‘Henry James and Charisma’, says: “The sheer speed at which we live now means that the fortune, or fate, of words has speeded up. Words that seemed simple a week or a year ago suddenly seem coloured. We need good novels to make us slow down, to make us think about how certain forces are always at work, in ourselves and in others. At the very least they may make us think twice before marrying Osmond – or voting for the wrong Roosevelt.”

Reflection as a form of resistance. Putting distance between ourselves and the white heat of personality. Making sure it works for us and not just on us. Psychology, politics and literature are clear that when it comes to charisma we need to proceed with caution.

But charisma can also be a force for good. It can make things happen. And perhaps most importantly, it turns out that, in the end, charisma is not in your genes or your stars. Charisma can be learned.

A programme for charisma

And if it can be learned, can it even be … programmed? Dr Hatice Gunes, Associate Professor at the Department of Computer Science and Technology, is investigating “adaptive robotic emotional intelligence for wellbeing” as part of her new £1m EPSRC (Engineering and Physical Sciences Research Council) project.

Her field is a multidisciplinary one, overlapping with social sciences and psychology as much as robotics and machine learning. This means that the broad brushstrokes of the charismatic personality – extroversion, openness and conscientiousness – are the same for a real person or a clever piece of circuitry. “We know that in human-robot interaction, personality matters a lot for engaging people and creating believable interactions,” Gunes says. “If people engage more, everything they do with that robot will be more effective. You could even adjust the extroversion level of the robot depending on the person they are interacting with.”

But before we get carried away into an apocalyptic future where we’re in thrall to machines (although parents of teenagers may argue we are already there), Gunes is careful to reset the argument. “The question is not so much ‘Can we create a charismatic robot?’ but more ‘In what circumstances would humans need one?’” she says. “For example, in the field of neuropsychology, autism is a very hot topic right now. Autistic children can have trouble interpreting facial expressions, but if they interact with child-like robots programmed initially to have quite limited, mechanical facial expressions they can gradually learn to understand emotional, non-verbal communication.”

And even here charisma starts and ends with us. “Robotics researchers envisage assistive technology that is designed to understand humans better, to help us develop,” says Gunes. “The idea is that we can co-evolve with technology rather than be replaced by it.” Charisma, then, can move mountains or lead us over a cliff edge. But it has no power at all until we decide to ‘buy it’. The damp rags might just stand a chance.