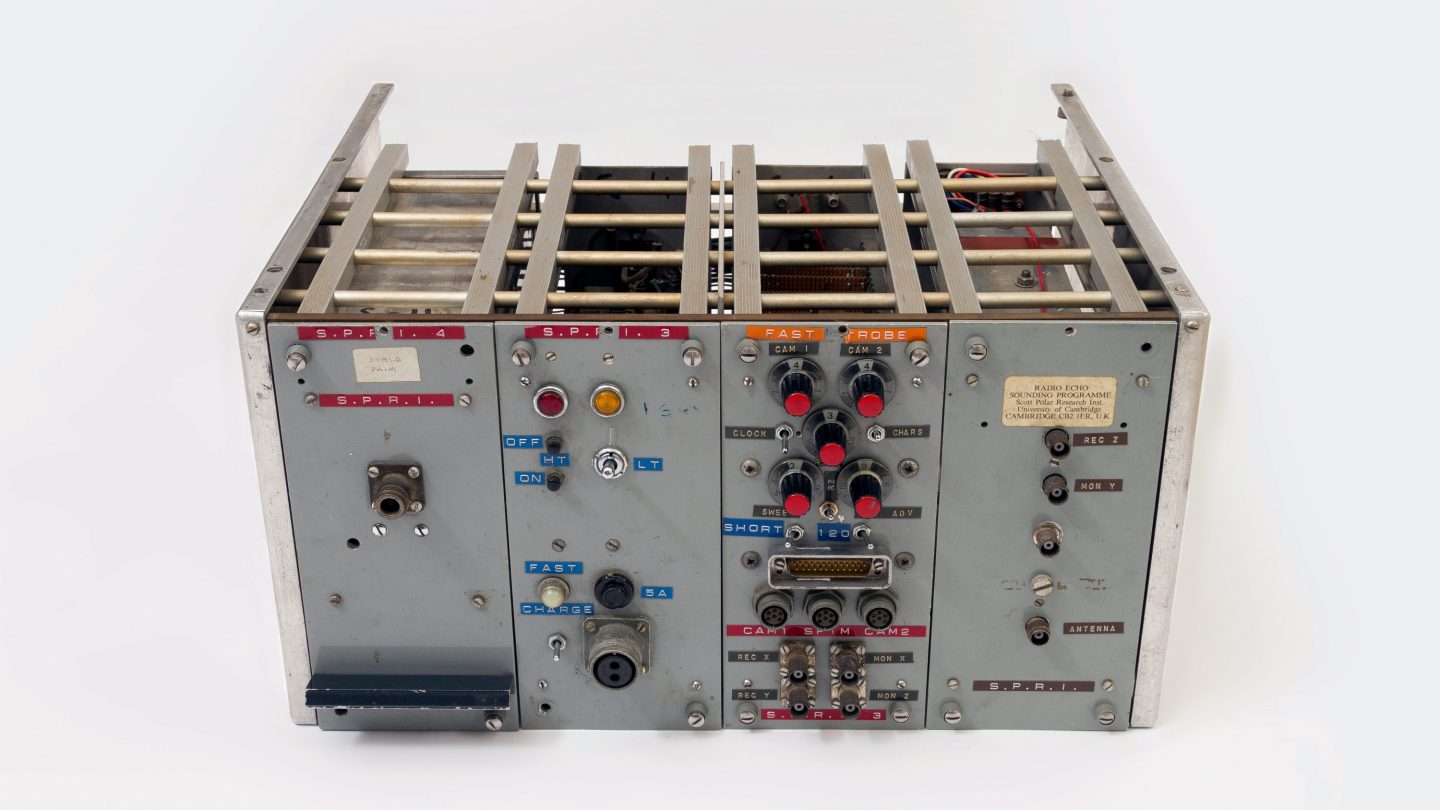 At the Scott Polar Research Institute, today’s cutting-edge equipment is tomorrow’s exhibit – so long as it doesn’t get lost in a cupboard for 60 years.

Antarctica, 1969. A group of men are strapping a blocky, metal contraption to the underside of a tiny plane. Back inside the plane, they connect the machine to an oscilloscope. Next, they set up a film camera. The whole scene has a makeshift feel to it, but make no mistake: this is the dawn of a new age of Antarctic exploration, the first time scientists will soar over the world’s most inhospitable continent in an attempt to find out what is under its vast ice sheet. And that box – a Mark IV radio echo set – is what will enable them to do it.

As the plane flies over the frozen continent, the radio set transmits electromagnetic waves that pass through ice but bounce off solid rock. Using this technique (known as radio-echo sounding), they discover mountain ranges, valleys and lakes hidden under the ice – including the largest, Lake Vostok, at 250km long. But as technology advances, the Mark IV is unpacked back at the Scott Polar Research Institute (SPRI) and never packed up again.

“When Scott and Shackleton explored Antarctica, all they could do was walk across its surface. There was no sense of what lay underneath their feet,” says SPRI curator, Charlotte Connelly.

In 1961, the Antarctic Treaty came into force. Twelve nations with an interest in the continent agreed to keep it for peaceful purposes, making possible collaborative science projects. That’s when scientists from the SPRI created the radio-echo set and started flying over Antarctica and Greenland with it, working with colleagues from Denmark and the US military.

Between the project’s end and the Mark IV’s eventual resurfacing, nobody is quite sure what happened to the device: it was probably left in a cupboard.

“We’re quite unusual in that we are an active research institute and we’ve got a museum, an archive, a picture library and a research library all in one building,” says Connelly. “So you might put your everyday work kit in a drawer – and someone might find it in 20 or 30 years, and look at it with new eyes.”

The Mark IV and the measurements it took are still vital to helping us understand how the continent is changing, she says. “And that’s incredibly important to our climate-change modelling, and all those ongoing discussions. It’s not the kind of science that you publish and forget about. It’s a fundamental part of our record of what’s happening in Antarctica.”

The SPRI is founded in Cambridge as a memorial to Captain Robert Falcon Scott, RN, and his four companions.

The Institute moves from rooms above the Sedgwick Museum to a new home, designed by Sir Herbert Baker, on Lensfield Road.

The Ford Foundation enables the Institute to expand with new offices, laboratories, cold rooms and a lecture theatre.

To commemorate the centenary of the Terra Nova expedition, the Institute’s Polar Museum is refurbished and reopened.

The SPRI celebrates its centenary looking forward to the future as a world leader in polar research, education and heritage.